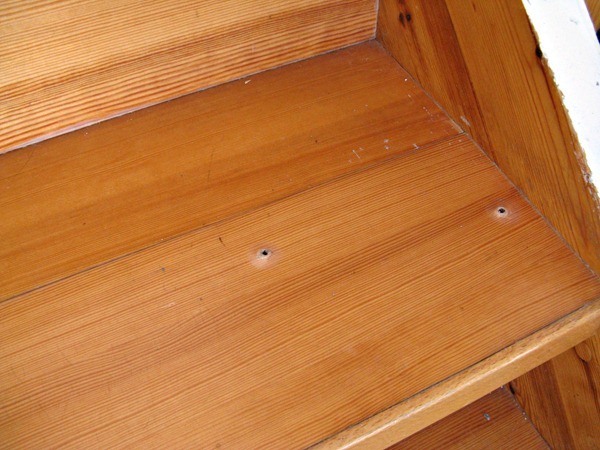 I’ve been pretty sure about what I want to do to most parts of the house but the stairs have been really tricky to figure out. All the floors are oak and the stairs are pine. To make things worse the previous owners at one point used a step kit to spruce up the worn treads. Oh, and they had a sitting elevator to the top floor so there are screw holes everywhere. 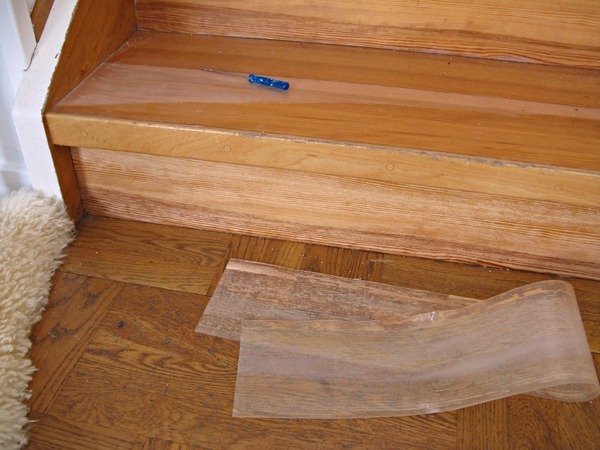 Too bad they didn’t use a wooden kit but instead used sheets consisting of a sandwich of plastic, cork, veneer and plastic again. Yeah, I know. Here’s me peeling off one of those plastic strips. 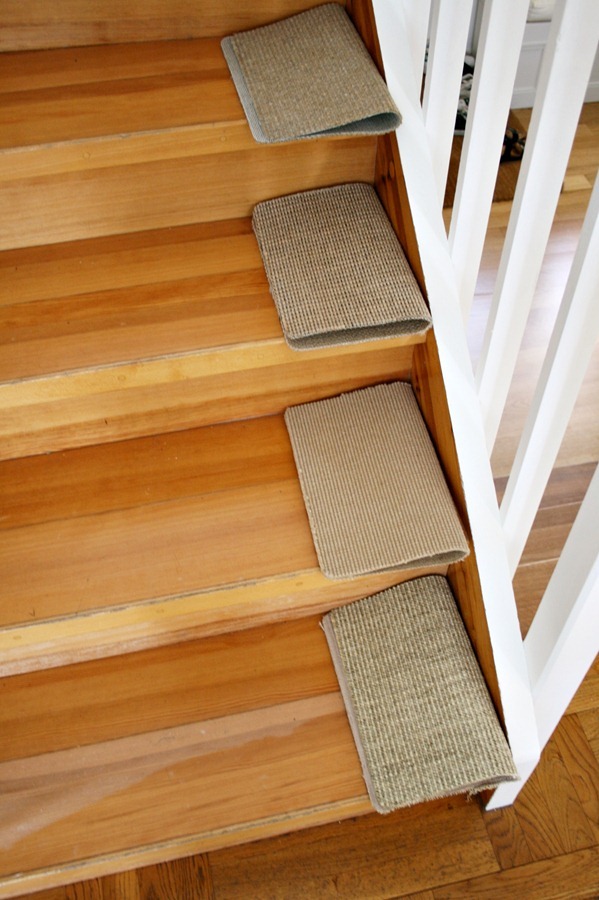 I toyed with a lot of ideas. One was to use the same type of step kit I used in the hall  but it would have been really tricky to fit because of the curve half way up + very expensive. 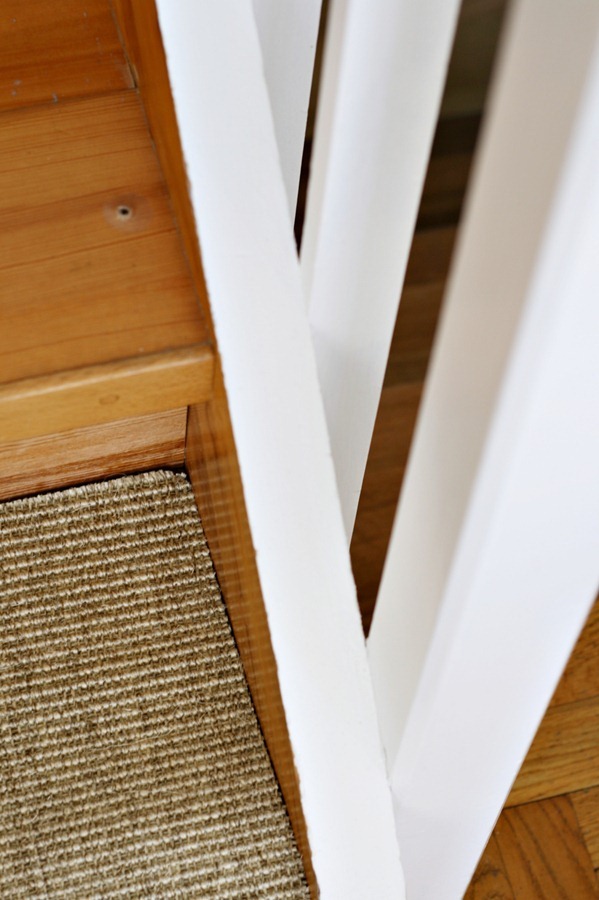 I was almost sure I’d go for this idea and had picked out this one when I realized that Wille and I eat lots of meals upstairs in front of the TV and I’d worry about tripping and spilling. Mini and Bonus would have loved this option though. Then the project lay dormant for a while. 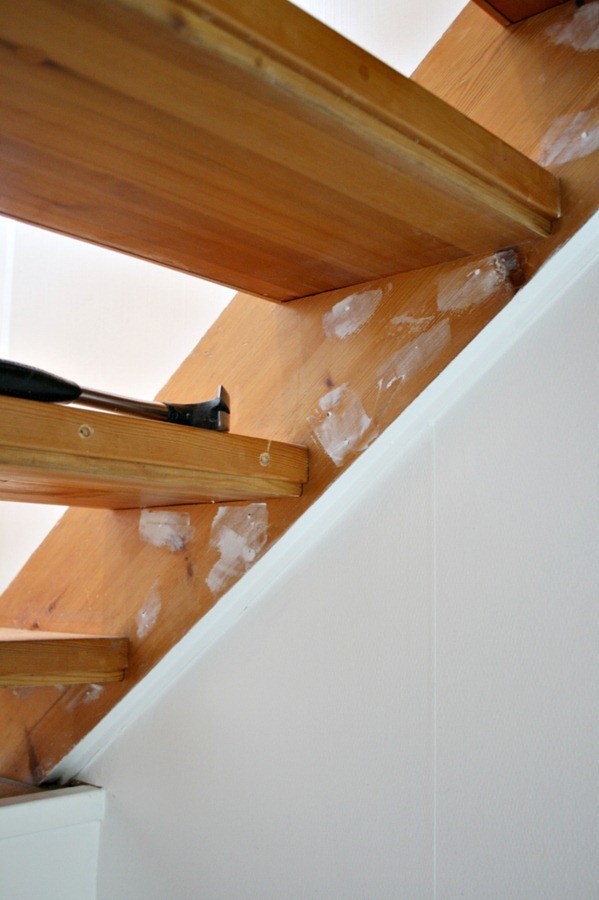 I realized that this projects would have to be done in stages. For one we need to use the stairs to get to the bathroom and Wille’s room so the main part from the living room to the bathroom will have to wait until summer when he’s away and I’m on vacation. I decided to start my project at the very top which is only four steps that can be jumped over holding the handrails on either side. Apparently the top of the stairs used to be closed but had been opened up to let more light in I guess which is great but the holes were still there so I filled them. I also removed those badly fitted strips of wood at the backs of those four steps. 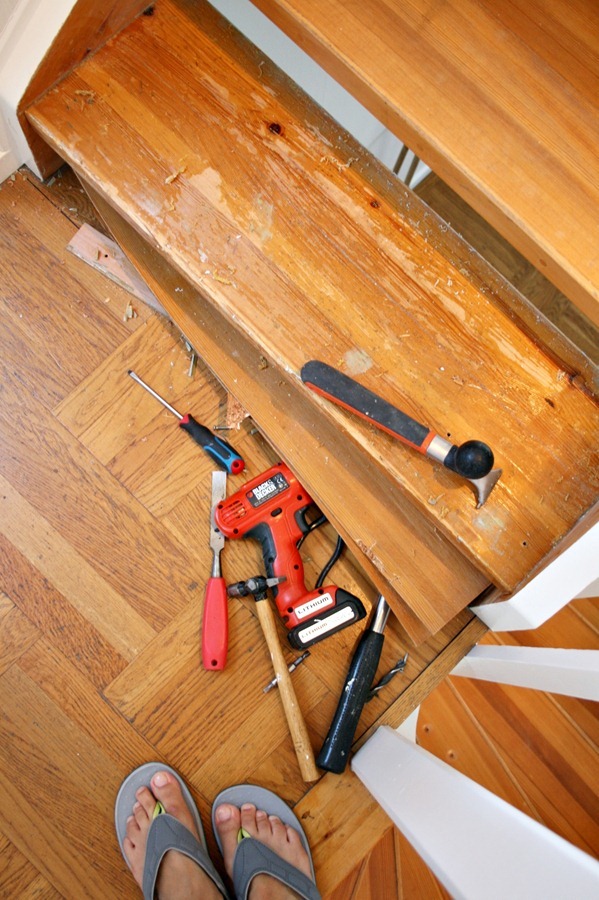 I actually started this back in late summer (hence the flip flops) to check out the condition of the steps under the kit and thought I might sand the original ones and so I removed one. Lots of glue residue and the wood splintered in places. Ugh. 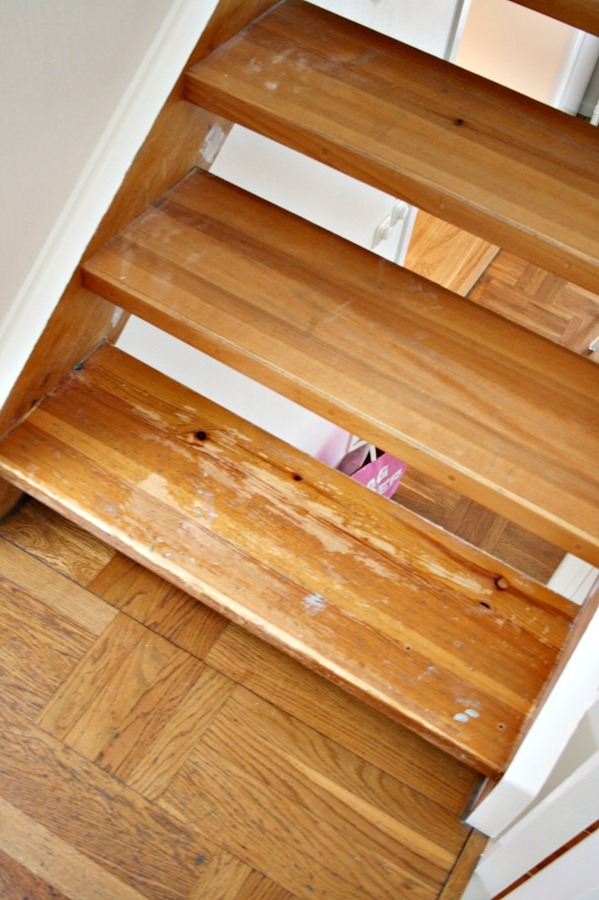 I scraped everything back as well as I could but this made me again reconsider how much time and mayhem in terms of dust I wanted. I’ve since gone back and forth between a kit after all, sanding and varnishing, sanding, staining and varnishing and the sisal. Yesterday’s post gave a bit of a clue on what’s going on though.