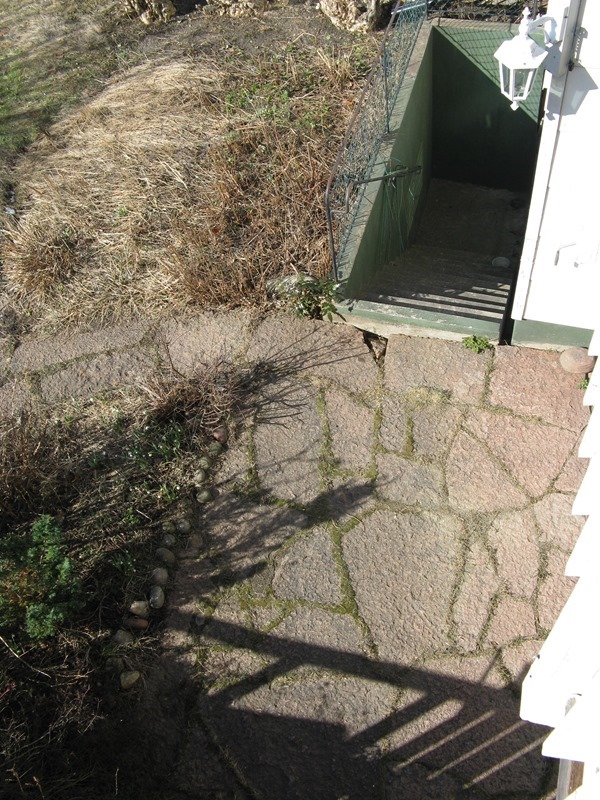 Here’s a long overdue post. For some reason these garden posts are the hardest to put together. I guess it’s because I’m never really happy with the photos in them. Too green, to bright yadda yadda yadda. Anyway this is also the second time I write it because as I was happy to have finished it an hour ago I for some reason wasn’t able to save and it was all gone. So frustrating!

The photo above is from just before we moved in a bit over two years ago. The flower bed in front of the basement stairs looked very sad an bare. As did those god awful fleshy pavers. 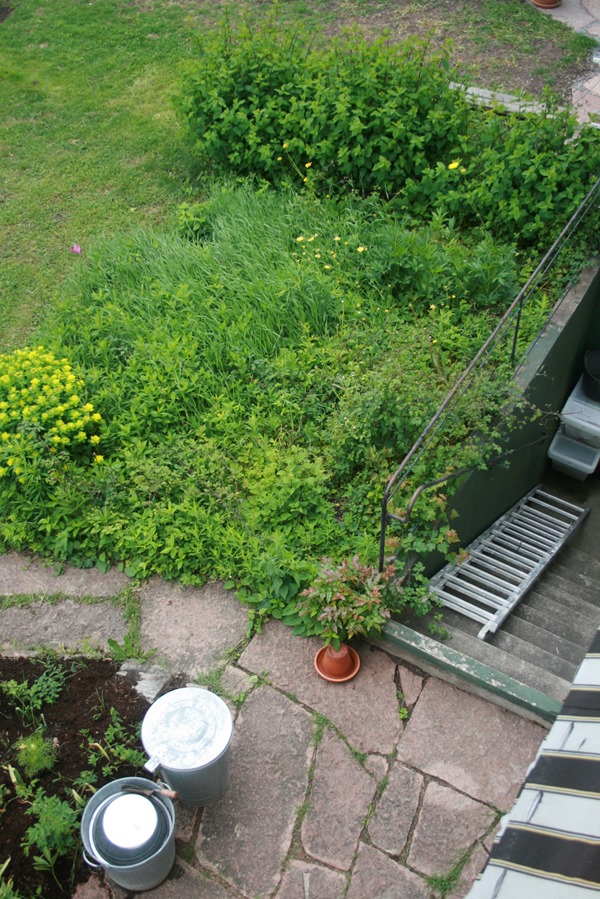 After a couple of months, not so bare anymore but still sad. Everything as so overgrown with weeds and grass. 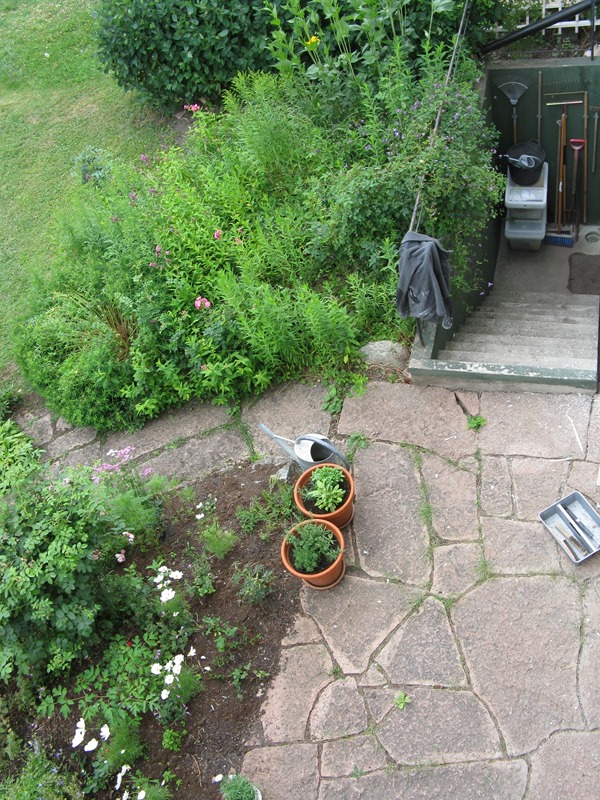 I tried best as I could to sort things out but the layout and the multitude of different flowers was just too much and I knew I would have to do something drastic about it. 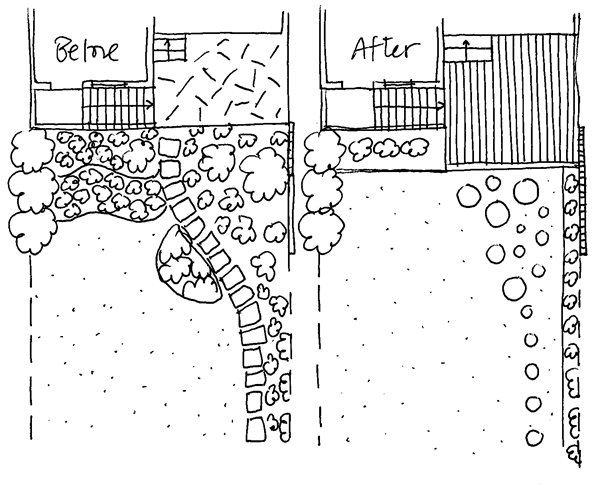 So I started to make plans for a simpler back yard. Both simpler to the eyes and to maintain. I actually ended up doing pretty much what was in my plan except for the concrete pavers which I skipped. 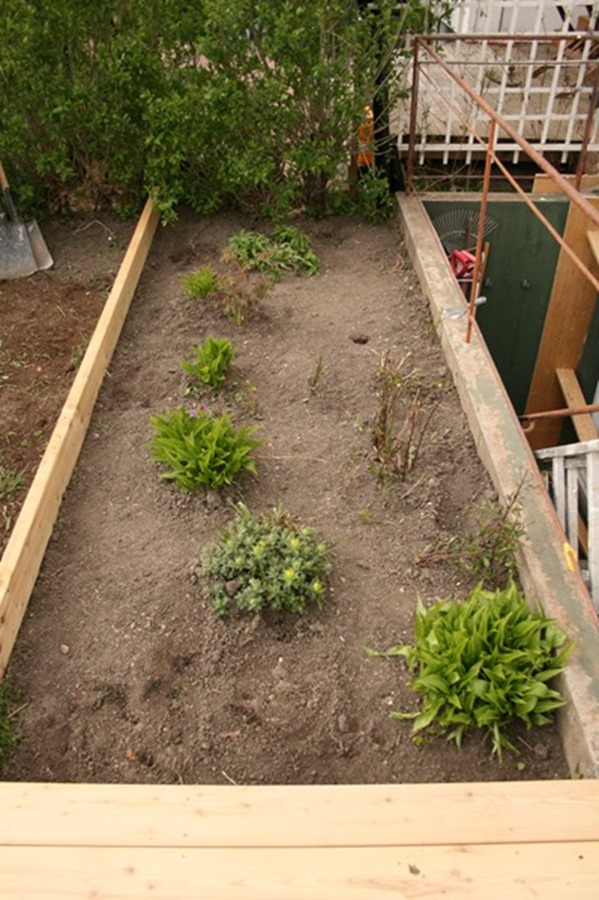 As the deck got built the flower bed became a continuation of it. I didn’t save a whole lot of what was originally there, gave most of it away to neighbors and random people via the internet. I did save some hostas, the clematis and a peony. 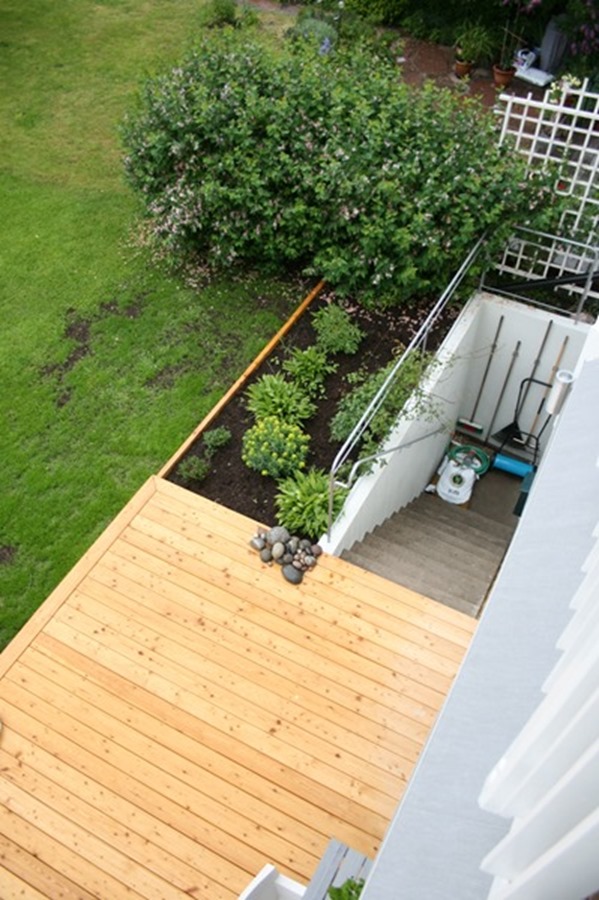 I also saved that yellow thingy close to the deck but later got rid of that too as yellow in the garden’s not my thing. 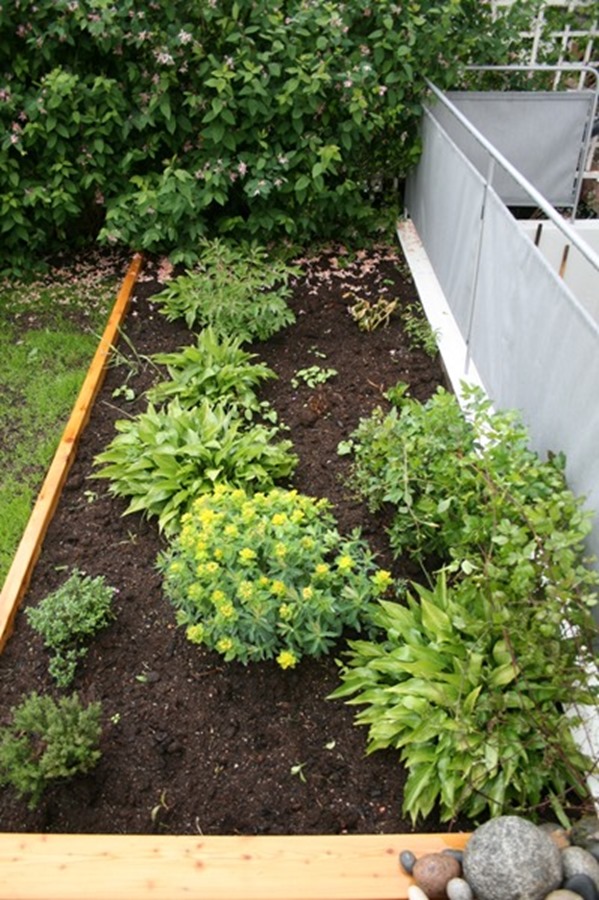 I finally got started replanting after the deck was finished. I basically dug all this out. 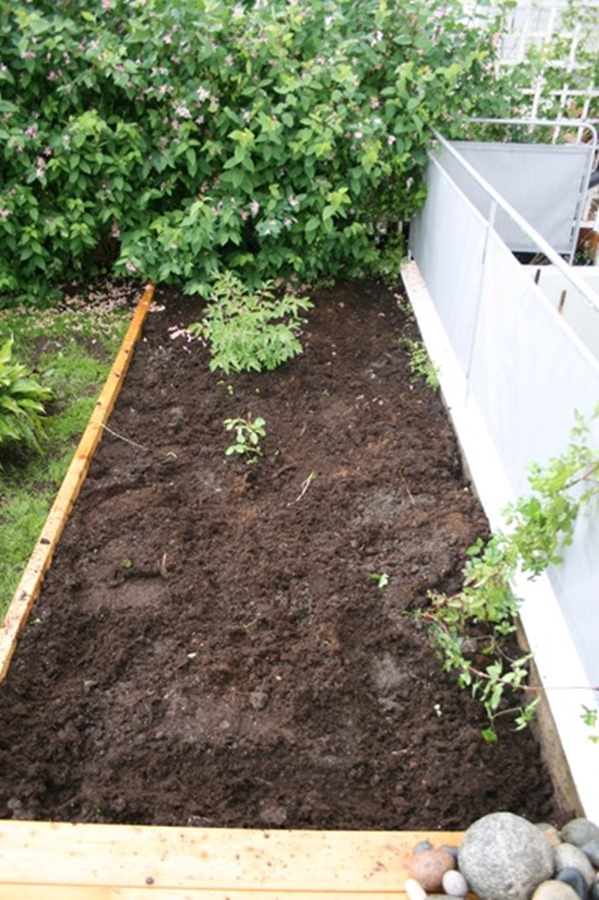 Like so, only leaving the peony in it’s place and a tiny white rose which I salvaged from another flower bed. Also the clematis runs wild in my back yard and I intend to keep it that way so I just left that as is. 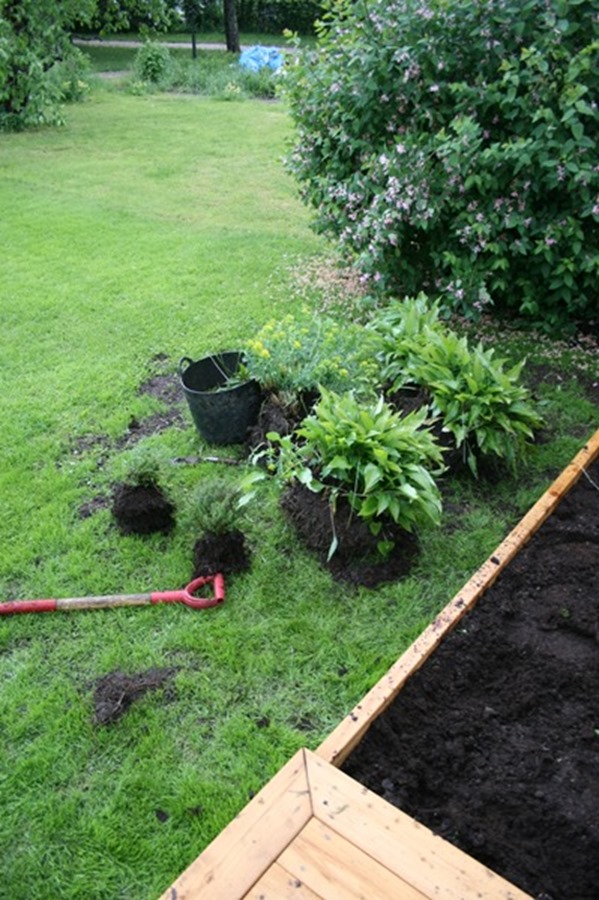 I lifted the clumps of hostas out on to the lawn… 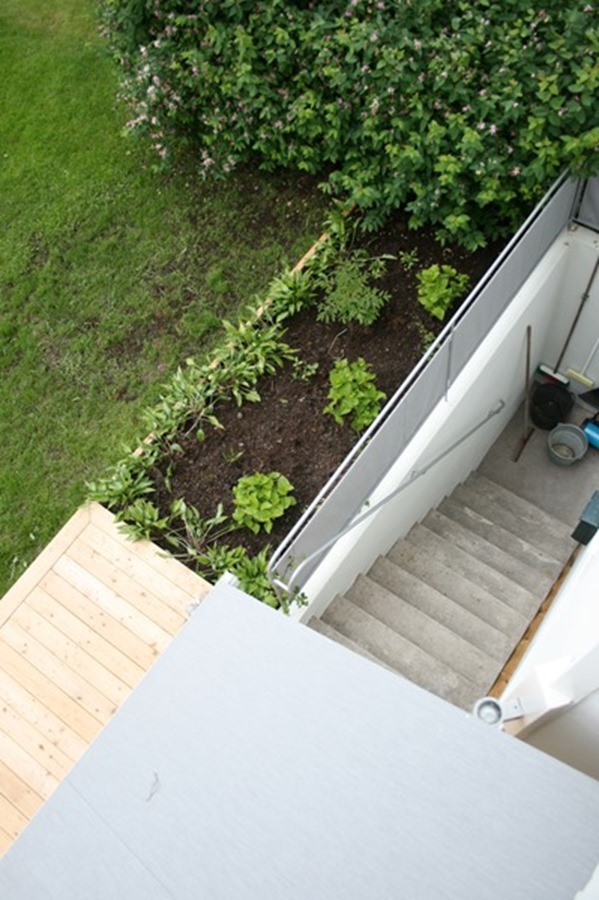 … divided and replanted them as a border. They did look a bit sad and leggy last summer since they didn’t have anything to lean against. I also added three white Endless Summer hydrangeas which look puny here but which are supposed to become 150 cm tall eventually. 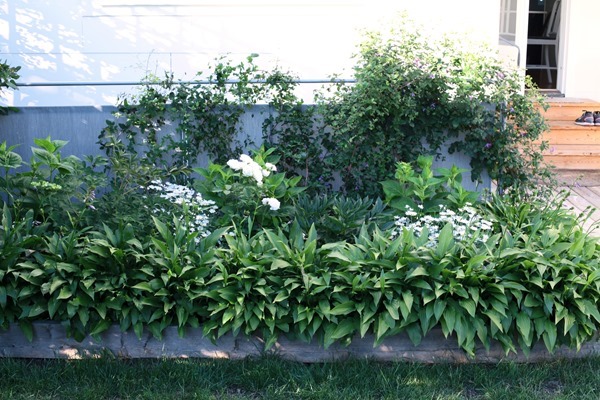 This photo was taken earlier this summer. I’m really pleased with the hosta border. The hydrangeas are still quite small but have had beautiful blooms (there are still some). 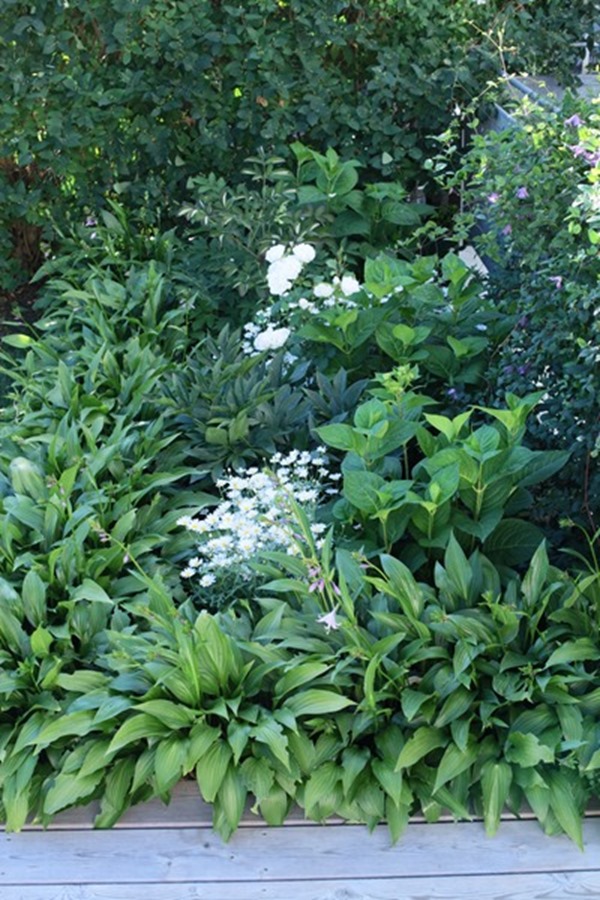 Until the hydrangeas reach their full height and width I’ve filled the gaps with some marguerite daises. And that white blob towards the back is the white rose I saved which turned out to be beautiful once it got better growing conditions.. 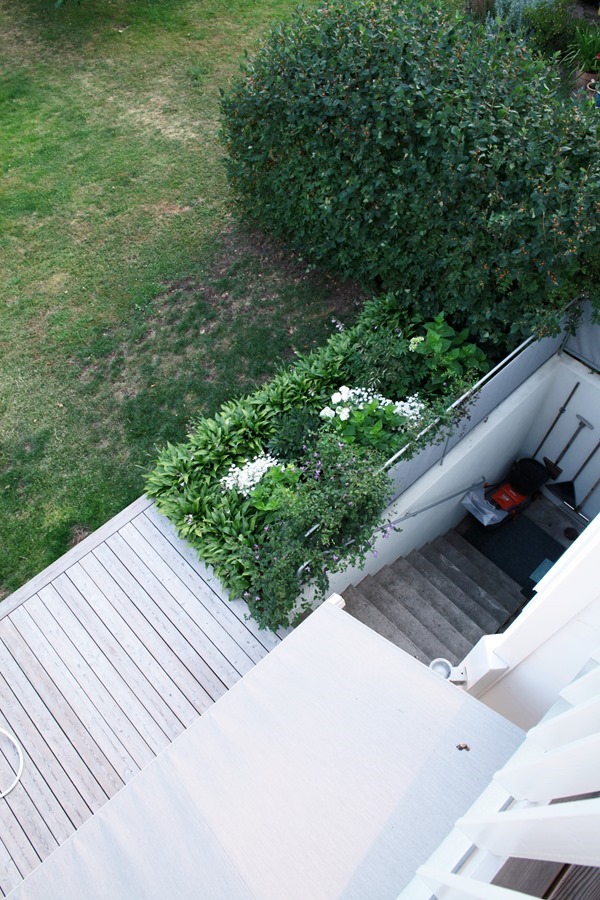 And there it is all nice and lush. As you can see from this view the lawn was still in pretty bad shape earlier when I took these photos (we’d hardly not had any rain so my grass seeds didn’t want do do their thing) but happily that’s filled in since. 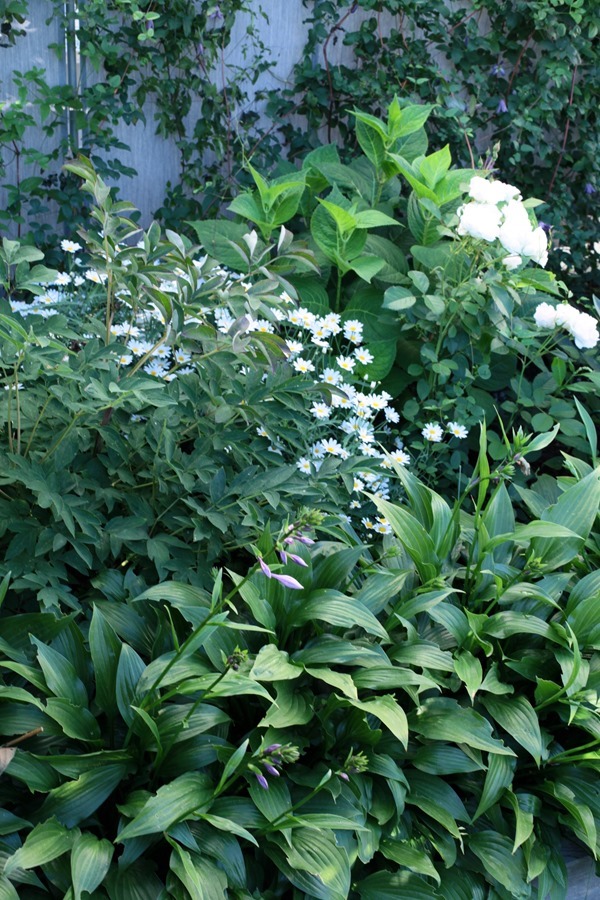 There, I did it! The post is up, finally!

If you want to know more about the garden there’s a category in the archives named  In the garden so check that out. If you want more about the deck and how it was built etc , try typing in “the deck” in the search bar at the top of the sidebar and you should find it all there. The search bar is actually a pretty great tool which I use all the time myself when I look for earlier posts.