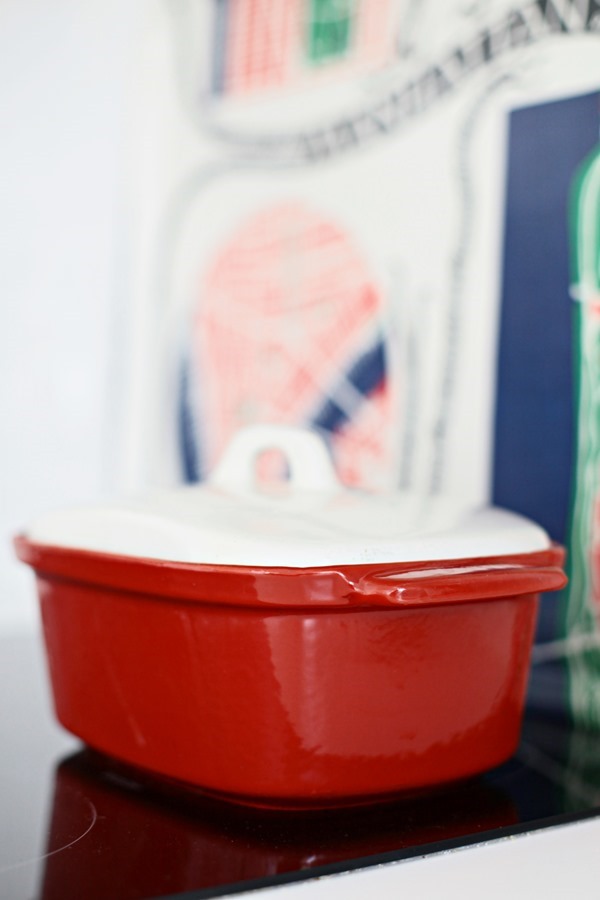 So, I didn’t just bring home an orange ash tray from my mom’s last week. Mom and I were talking about how I’m now cooking more than ever and how I’ve come to the conclusion that while cooking’s still not my favorite thing when I do cook I prefer casseroles, stews and soups. Those are dishes where I can throw stuff in a big pot and it can simmer away on its own while I do other things. I haven’t had a good solid pot though so I’ve been contemplating getting one of these which will do the job AND look great at the same time. Then mom reminded me that she used to have something like that but smaller but we couldn’t find it in the kitchen so she figured she’d gotten rid of it.  When I cleaned out a cabinet in the sun room a day later I found it!   It’s by Husqvarna and hasn't seen any use for a looooong time but I do I remember it being in use back in the 70’s and early 80’s. It looked a bit grubby when I found it, you know the greasy grub from when it’s been in a cabinet for “a while” and probably wasn’t squeaky clean when it was put there in the first place (sorry mom). So I armed myself with a blunt knife, a Scotch Brite, some Vim (Jif to some of you) and a good deal of elbow grease. First I prepared a smoking hot bubble bath with an OD of detergent and dunked the pot and lid in there for at least an hour while I ticked off my list of other things to do. After a good soaking I used the blunt knife to scrape off the worst of the burning on the outside and then gave the inside and outside a good scrubbing with the Scotch Brite and some Vim/Jif until all the burning and grease was gone.   I couldn’t resist putting it through the dish washer too when I got back home and the result is pretty awesome. There are a few chips in the enamel of the lid but I’m ok with that. I lightly greased the cast iron inside with canola oil after it was dry and I can’t wait to use it. It is on the small side so I might still get a larger white Le Creuset for those big batches (I like to cook less often and freeze) and for when we have company but I like the idea of using this one for dinners for Wille and I. Do you have any favorite one-pot-cooking, or slow-cooking recipes that can be done in cast iron pots like these? I'd love to hear and add them to my repertoir!

Spring approaching (still cold but days are getting longer) gets me in a growing mood. I’ve shown you this basil growing tip before but it’s worth repeating. All the instructions with more images are in the earlier post but basically we get fresh potted basil in the grocery store, cut the stems off at dirt level and stick them in a glass of water for a couple of weeks. That’s the stage I’m at now. After the stems grow roots you plant them in potting soil in a large pot and you have fresh basil for the whole season. We’ve successfully grown basil like this for years as opposed to several failed attempts growing them from seeds. Try it!

The other day during the weekend we did some yard work and as we removed some very overgrown honeysuckle we discovered this. Moss. The moss was hanging under the edge of our patio and we removed it to clean things up before fall. I couldn't toss something so awsome away of course so I filled two pots (without holes in the bottom) with soil and laid the moss on top, curling it as I went around the edge towards the center. Mini made sure I did the job properly and that I watered the moss well before bringing it inside.  Inside I've misted the moss with a spray bottle a few times and it holds up beautifully. Simple and free.