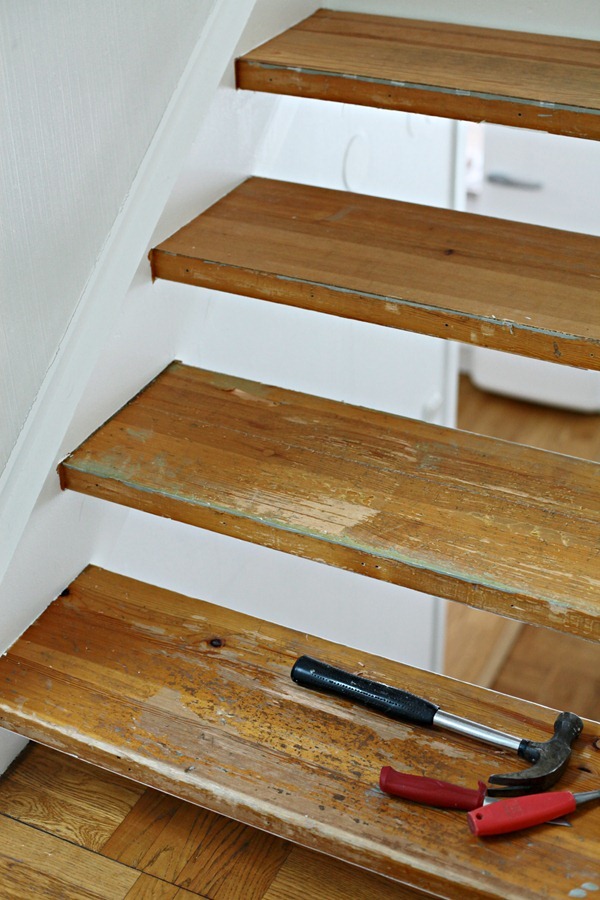 So after prying off the previous owners step kit from the top portion of the stairs I was left with this.   Glue, splinters, pieces that had come off. Not a pretty sight but really the point of no return.   After scraping the wood to remove the glue my new sander helped getting the steps smooth. I had finally decided to go for a stain that matches the oak and varnish on top of that.   Um, yeah. This was actually the second attempt at finding the right match for the oak. The first one which I tried out on a piece of scrap wood came out too orange and this one well… I know, terrible. If I had tried to match mahogany then maybe, but oak? Really?   Needless to say I couldn’t live with that so out came my trusted can of white paint.   Three coats later, problem solved. I’m keeping the landing oak but the rest of the stairs will eventually be painted white. That’s a summer project. Now I know I don’t have to be as meticulous sanding though. Only a lighter sanding (after all the rest of the prep work obviously) will be needed and I can fill any holes without worrying about matching the wood finish. I know white stairs aren’t ideal with dark kitties but I’ll have to live with that. Just need to sweep more often in between my weekly vacuuming sessions I guess. I have to say I’m happy with the result so despite all the back and forths it ended well. 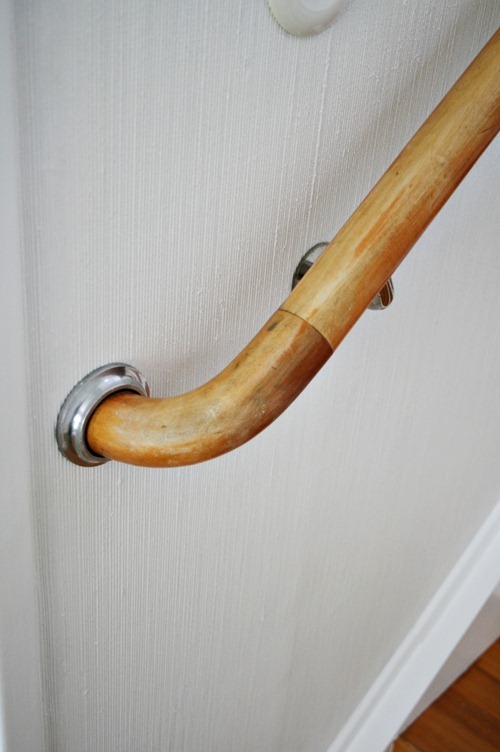 Having a neighbor who is just as much into DIY as yourself and who lives in a house just exactly like yours is the best. K and I discuss projects, lend each other tools and materials and we run back and forth checking out progress in each other’s houses all the time.   K stained her handrails which totally inspired me to switch from the orangey pine to something richer. I was a little apprehensive though because I didn’t want to have to sand every bit of the old varnish off but it turned out that she had bought a product that stains and simultaneously varnishes on top of old varnish. Her handrails turned out great and when she offered me some of that varnish I happily accepted and went on a varnishing spree and did all of mine in one fell swoop.   All it took was a light sanding to key the old varnish and then it was just a matter of brushing it on.   So from this…   … to this was a vast improvement. Now I just have to fix those treads. I had to wait until the skylights were fixed until I could work on them because my guys had to go up and down a lot and it seemed silly to do anything before they were done. When I’m done painting the radiators upstairs (ran out of paint on Sunday) I’ll order the sisal that will cover the faux pine step kit that the previous owners installed. Excited (and a bit nervous) to see what it will look like when it’s done.   As for the darker, no longer orange handrails, I love them.